Freight trains have been running on the Mattoni railway from Kyselka to Vojkovice for 10 years, saving the journey of more than 20,000 trucks 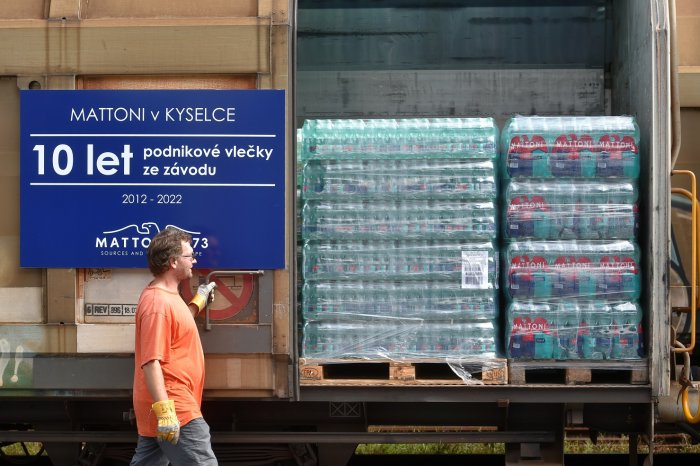 On 28 August 2012, the first train with a load of local mineral water left Kyselka and travelled along the restored railway siding to Vojkovice nad Ohří. Since then, Mattoni 1873 has transported 669,000 pallets of its products to Moravia by rail. The 762 freight trains dispatched replaced over 20,000 trips of fully loaded trucks. By using rail transport, Mattoni 1873 is significantly helping the environment and easing the burden on the Czech road and motorway network.

"Our project proves that even fast-moving goods can be transported quickly and efficiently by rail. Unfortunately, in the ten years that freight trains have been running with our beverages, the use of rail is becoming more and more challenging both in terms of organisation and financially. Despite its environmental benefits, rail transport is not being promoted or, at the very least, the obstacles that make it difficult to use rail for product transport are not being removed. But we persevere because we want the beverage industry to be sustainable, we have been taking real steps for this for many years and the use of rail transport is one of them," says Alessandro Pasquale, CEO of Mattoni 1873.

The eight-kilometre line from Vojkovice nad Ohří to Kyselka was built by Heinrich Mattoni and put into operation in 1895. Public passenger transport on the line ended in 1935, and it operated as a freight railway until 1997. In 2012, Mattoni 1873 (under the name Karlovarské minerální vody, KMV) invested CZK 10 million in the reconstruction of the entire line. Within the reconstruction 560 sleepers and replaced 820 metres of rails were replaced. Every year Mattoni 1873 regularly invests several million crowns in improving the technical condition of the railway siding.

With the resumption of the siding operation, Mattoni 1873 began to use the railway to transport its products for customers in Moravia, to the distribution centre in Mostkovice near Přerov. Trains with Mattoni and Magnesia mineral waters and Aquila spring water run from Kyselka all year round, with about 2 trains a week in high season.

Now, rail transport is an important part of the Mattoni 1873 distribution chain. The annual volume of Mattoni 1873 products transported by rail has grown from 64 thousand pallets in 2013 to 70-80 thousand pallets in recent years. This makes Mattoni 1873 one of the largest ever transporters of fast moving food goods by rail. Roman Dittrich, then supply chain manager at KMV, was awarded the LOG-IN - Innovator of the Year 2012 award in 2012 for the project to rebuild the siding and the associated start-up of rail transport of products.