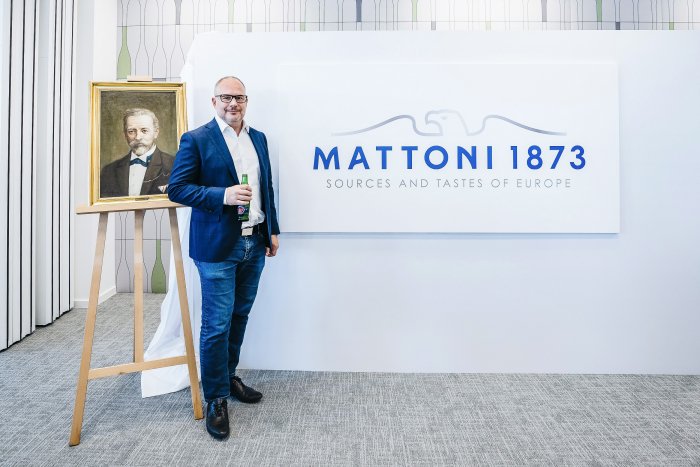 The largest producer and distributor of non-alcoholic beverages in Central Europe, Karlovarské minerální vody, is uniting the family of its companies under a common name: “Mattoni 1873”. Name of the founder and the year of establishment are symbolically covered by eagle’s wings with a motto of “Sources and Tastes of Europe”.

The history of Karlovarské minerální vody Company dates back to 1873, when Heinrich Mattoni, successful businessman and visionary, founded in Kyselka near Karlovy Vary the Mattoni Company, which later on became the foundation of beverage empire. Mattoni managed to supply its exceptional mineral water to Vienna Emperor’s court as well as across the ocean.

In the 1990’ the Italian Pasquale family followed up on the successful Mattoni tradition. Antonio Pasquale built the company from the basics – from “mattoka” (the No. 1 Czech mineral water) and the Kyselka factory. His work was followed upon by his son, Alessandro Pasquale.

“In Mattoni 1873 we unite first-class mineral and spring waters from Central Europe and world-famous beverage brands. This union makes us CE market leader. A leader, which is still guided by the family values of its inception,” says Alessandro Pasquale, General Manager and leading personality of the whole Group.

The Group gradually grew from one mineral water bottling plant located in the spa region of Western Bohemia producing 50 million of bottles, up to the leading central-European distributor of non-alcoholic beverages producing almost two billion of bottles. The portfolio expanded beyond mineral and spring waters, now it contains also juices, soft drinks and snacks. The Group comprises 12 production sites and 3 200 employees in 8 countries.

“With the increasing number of countries and product categories, we decided to give ourselves a new common name, a name that would better describe, who we are. We chose to connect us to the tradition of our roots, to Heinrich Mattoni. And to the year 1873, when our Company’s history started. “Mattoni 1873” is where we come from. “Sources and Tastes” are at the core of our business. And “Europe” is where we aim to go. We are proud of our heritage. It inspires us for our journey of responsible leader caring about the future,” adds Alessandro Pasquale.

The common identity of “Mattoni 1873” does not influence the current legal set-up of the Group (i.e. Karlovarské minerální vody, a.s. still operates).