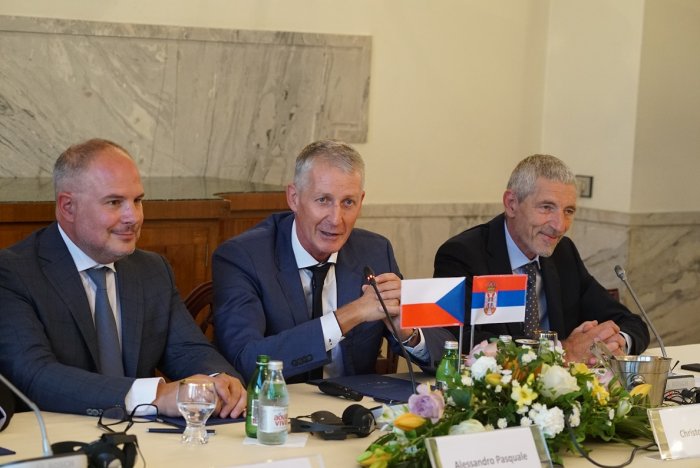 Today in Belgrade, Mattoni 1873 through its subsidiary, Karlovarské minerální vody (KMV) and PepsiCo, Inc. (PepsiCo), through its subsidiary Frito-Lay Trading Company (Europe), finalized the acquisition of 100 % stake in the Serbian producer of mineral water and soft drinks, Knjaz Miloš, from Mid Europa Partners, via joint venture.

The transaction, approved by the respective antitrust offices, comprises Knjaz Miloš’s production site in Serbia, including its brands such as Knjaz Miloš, Aqua Viva, Guarana, ReMix Knjaz, Tube and Gusto.

With a history of over 200 years, Knjaz Miloš, based in Aranđelovac, Serbia is among the largest producers of mineral water, soft and energy drinks on the Serbian Market.

PepsiCo, a global food and beverage company operating in more than 200 countries and territories around the world, and Mattoni 1873, the largest distributor of non-alcoholic drinks in Central Europe, have a well-established business relationship in Central Europe. Mattoni 1873 is the producer and distributor of the PepsiCo beverages portfolio in the Czech Republic, Hungary, Slovakia and Bulgaria and the PepsiCo snacks portfolio distributor in the Czech Republic, Slovakia and Hungary.

„Welcoming Knjaz Miloš into the Mattoni 1873 family will provide the company not only with growth opportunities, but will also offer stability to our customers and employees. The union of Mattoni 1873 and Knjaz Miloš portfolios will bring excellent services to our consumers and customers,” says Alessandro Pasquale, General Manager of Mattoni 1873.

„Over the last years the collaboration between PepsiCo and Mattoni 1873 has been very successful and with this transaction we see significant potential to grow and expand our presence. We are delighted to partner with Mattoni 1873 on this new journey”, said Christophe Guille, GM Senior Vice President PepsiCo Central Europe, Greater Balkans & DACH.

„Knjaz Miloš has introduced product and packaging innovations to strengthen its leadership in the water and drinks categories. The company's new and refreshed brands have led the way in direct digital communication with younger customers. This innovative growth has led to the business more than doubling in size during Mid Europa's ownership. We wish the Knjaz Miloš management continued success as part of Mattoni 1873 and PepsiCo”, added Robert Knorr, Co-Managing Partner of Mid Europa Partners.

„By improving every aspect of our business performance over the past few years, we have made Knjaz Miloš a respectable company in our industry within Europe. We look forward to joining the leading brands as a testament to our success“, said Miloš Stojisavljević, CEO of Knjaz Miloš.

Mattoni 1873 continues in its European acquisitions. Since 2008 it owns 100% share in Austrian Walduelle Kobersdorf. In 2015 it acquired Kékkúti Ásványvíz and Szentkirályi Ásványvíz, two leaders in bottled water in Hungary. In 2017 Quadrant Beverages JSC, official producer of PepsiCo soft drinks in Bulgaria, was included into the Group. And in 2018 they acquired bottling rights and assets of PepsiCo in the Czech Republic, Hungary and Slovakia.

Knjaz Miloš, based in Aranđelovac in central Serbia, boasts a tradition dating back to 1811 and is the leading mineral water market in the region of former Yugoslavia.