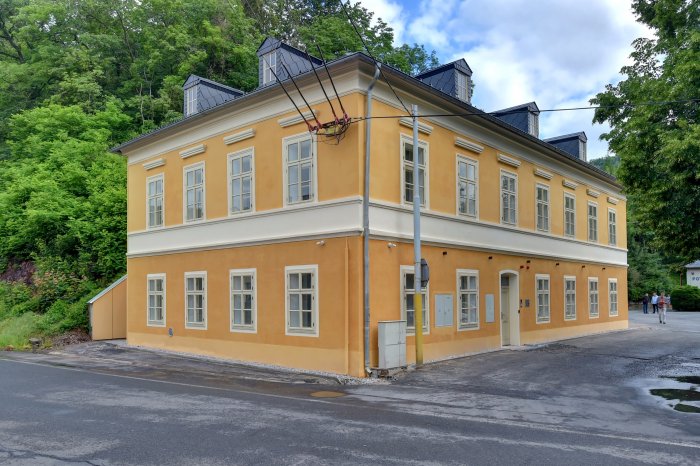 Mattoni 1873 completed several years’ reconstruction of historical building of a so-called Hotel Praha in Kyselka. It follows other already completely reconstructed buildings in Kyselka – residential house Stallburg and Löschner pavillon with Mattoni Museum. Hotel Praha was reconstructed under careful supervision of historians and will accommodate IT department of the Czech No. 1 in the beverage market.

“Our company is currently doing business in 8 European countries, however Karlovy Vary region and Kyselka remain our home, the place we came from and which we deeply care for. I am glad that by reconstructing Hotel Praha we could contribute to Kyselka’s rejuvenation. In this building we’ve combined modern technologies with history, as of June 2020 the IT centre of the entire Group is seated here,” says Alessandro Pasquale, Mattoni 1873 CEO.

The reconstruction was continuously supervised by the National Conservation Institute in Loket as well as Conservation department of Karlovy Vary municipality – from ensuring statics, via roof construction, up to windows, door, the isolation used, colours and structure of the facade.

Hotel Praha (until 1918 hotel Kronprinz and later on hotel Giesshübl) in Kyselka is a typical example of provincial hotel with restaurant from the era around 1880. During the Kyselka’s “golden age” it belonged to the best addresses, having a big garden restaurant and a bowling alley, summerhouse and screened terrace.

The current reconstruction was carried out in two stages with continuous consultations with the conservation authorities. During the first stage (2013) the house was statically secured; the roof construction was renewed in the original shape including lucarnes and the roof surface was then completely reconstructed. Original rafters were used as much as possible. In the second stage (2018-2020) interior and exterior of the building werw completely reconstructed. The interior installations are completely new, however they respect the original construction. The façade was renewed, and missing elements were added. On the ground floor, there are technical premises, storage and facilities and on the first floor, offices for 10 employees were furnished.

The reconstructed Hotel Praha uses technologies of a “passive house”, i.e. its energy consumption is as low as possible. This was achieved by employing a special technology of interior isolation (Remers sytem), which is fully in line with the conservation requirements.