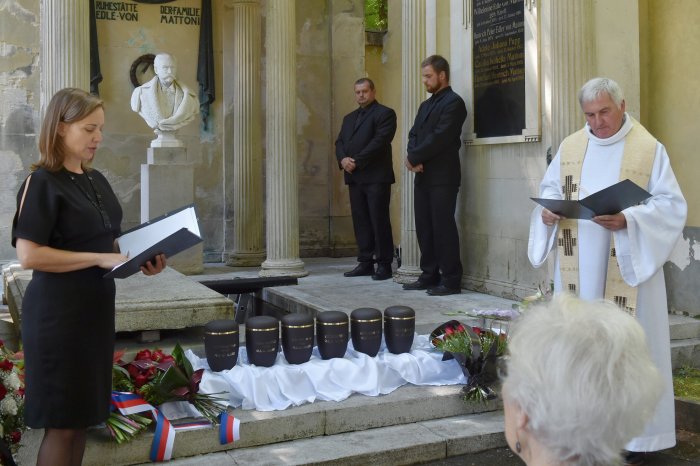 Today, the urns with the remains of six members of this important family, whose name is inextricably linked to Karlovy Vary and the region, were placed in the Mattoni family tomb at the Central Cemetery in Karlovy Vary - Drahovice. The most famous of those laid to rest is Rudolf "Rudi" Heinrich Theodor Mattoni, the great-grandson of the founder of the Mattoni mineral water fame, who visited Kyselka and Karlovy Vary repeatedly over the past decades.

The symbolic return of six members of the Mattoni family to their native region was attended by Rudolf Mattoni's son Carlo Mattoni, the CEO of Mattoni 1873 Alessandro Pasquale, representatives of the city of Karlovy Vary and the Karlovy Vary Region and other personalities associated with the city and the region, its tradition and history.

"I have a deep respect for Rudi Mattoni. I had several opportunities to meet him when he regularly visited the land of his ancestors since the 1990s, as he was interested in Kyselka and the family tradition. I was also inspired by his lifelong interest in the protection of nature and especially butterflies, which he considered to be one of the important indicators of the purity of the environment. Today's Mattoni 1873 continues not only the historical legacy of the Mattoni family, but also Rudi's commitment to a better environment. This year, we named our new conservation project, Rudi Mattoni Butterfly Meadows, in his honour. Through it, we want to protect endangered butterflies and bring back species diversity to the landscape around our plants," says Alessandro Pasquale.

"Today is such a homecoming for our family, and we are so appreciative of everyone's help in making it possible. Karlovy Vary has been home to the Mattoni family since the late 17th century when Octavio Mattoni came here from Tremezzo, Italy. My father visited the Czech Republic repeatedly, socialised with fellow entomologists at the University of South Bohemia, was interested in the restoration of the spa in Kyselka and also established friendly relations with Alessandro Pasquale and the Mattoni 1873 company. I am very grateful that today we can fulfil my father's wish and lay him and other relatives to rest in the family tomb in Karlovy Vary," added Carlo Mattoni.

After their deaths, they were buried abroad, where they had previously spent much of their lives. They now rest in the family tomb in Karlovy Vary alongside other members of the Mattoni family, including the founder of the Mattoni brand, Heinrich Edler von Mattoni.

Rudolf Heinrich Theodor Mattoni ("Rudi") (* October 6, 1927 Hollywood, ✝ January 3, 2022 New York)
Great-grandson of the founder of the fame of Kyselka and the local mineral water Heinrich Edler von Mattoni.
He studied natural sciences and specifically focused on entomology. He became a world-renowned expert in the field of butterfly fauna and was professor emeritus at the University of California, Los Angeles. In Argentina he discovered several unknown butterfly species, and in his home country of the USA he worked on restoring the natural habitat of endangered butterfly species.
Rudi Mattoni has regularly visited the Czech Republic in recent decades. He has taken a keen interest in the legacy of his ancestors and the restoration of the former spa, was a member of the board of directors of the public benefit society Lázně Kyselka, and participated in the opening of the Mattoni Museum in 2016. Rudi's interest in Kyselka and the Karlovy Vary region remained throughout his life, and despite his advanced age (95 years) he still wanted to visit the Czech Republic recently. He has now been placed in the family tomb in Karlovy Vary together with his father (Andreas Heinrich Otto Mattoni).

Alice Wilhelmine Mattoni (* 18 September 1896 Karlovy Vary, ✝ 8 November 1986 Salzburg)
Daughter of Leo Friedrich Karl, first son of Heinrich Edler von Mattoni.
She married Walter Pösch (1932), a paper merchant from Karlovy Vary. After the war they moved to Stuttgart, where Walter Pösch died suddenly in 1946. Alice then moved to Munich, where she ran the Rosenhof boarding house with her cousin Egon von Mattoni. After Egon's death, she lived mostly in the family home in Salzburg.

Adele Juliana Pupp-Mattoni (* 3. 3. 1874 Karlovy Vary, ✝ 13. 10. 1957 Salzburg)
Wife of Heinrich Johann Peter, second son of Heinrich Edler von Mattoni
Daughter of a hotelier family of Julius Pupp and Katherine Pupp, she married Heinrich Johann Peter Mattoni, a lieutenant of the Dragoon Regiment, on 21 January 1899. Three children were born to them. For some time the family lived in the Mattoni villa in Carlsbad in the middle of the Amalienhof garden, later moving to Salzburg-Aigen.

Andreas Heinrich Otto Mattoni (* 27 February 1900 Karlovy Vary, ✝ 11 January 1985 Vienna)
Son of Heinrich Johann Peter, second son of Heinrich Edler von Mattoni, and Adele Juliana Pupp. Father of 'Rudi' (Rudolf Heinrich Theodor Mattoni).
Until his death he was a well-known Viennese film and theatre actor. He made his debut in the 1922/23 season at the Burgtheater, then performed at the Wiener Kammerspiele and in the autumn of 1924 in Berlin, where in his first year he was cast in the film role of Tartuffe by Friedrich Wilhelm Murnau, and later in a number of other roles (he played mainly gallant lovers). In 1933 he returned to Austria and performed at the theatre in Josefstadt. From 1938 he lived in Rome and played minor roles in Italian films. In 1942 he returned to Vienna. After the war he worked briefly as a film producer. From 1957 to 1964 he was an associate of the director of the Vienna State Opera, Herbert von Karajan, and with him he experienced all the enormous successes of this brilliant Austrian conductor. He won the absolute trust of the famous conductor through his brilliant negotiation with singers, directors and directors, as well as his extensive language skills.

Cecilia Isabella Mattoni (* 28 January 1901 Karlovy Vary, ✝ 3 March 1965 Salzburg)
Daughter of Heinrich Johann Peter, second son of Heinrich Edler von Mattoni, and Adele Juliana Pupp.
She married Egon von Jordan, the son of the last district governor of Karlovy Vary and an actor. She lived until her death in 1965 in Salzburg in a house that belonged to her brother Egon Mattoni.

Egon Karl Heinrich Mattoni (* 3 September 1902 Karlovy Vary, ✝ 16 April 1962 Salzburg)
Son of Heinrich Johann Peter, second son of Heinrich Edler von Mattoni, and Adele Juliana Pupp.
He was one of the largest shareholders of the Grandhotel Pupp in Karlovy Vary (in 1943 he held 330 shares out of a total of 3,000). After the expulsion of the Germans, he ran a restaurant in Baden-Baden, and later he was the croupier of a gambling house in Konstanz on Lake Constance. As compensation for the loss of his property in the Czechoslovakia, he obtained a loan which enabled him to purchase the Rosenhof guesthouse on Dachauerstrasse in Munich. The guesthouse became a meeting centre for the displaced German residents of Karlovy Vary. Due to a serious illness, Egon had to leave his well-established business in 1960 and move to Salzburg, where he died two years later.