The first-ever returnable can will be available at Košík.cz 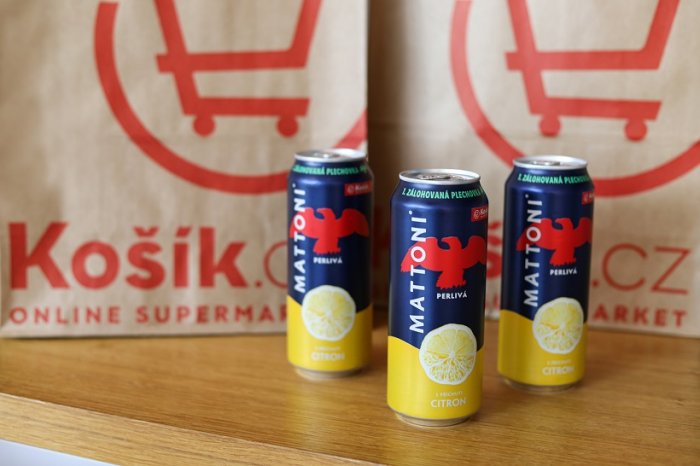 Returnable cans should draw attention to the need for sorting and recycling of beverage cans in the Czech Republic.

Prague, October 7th, 2020. Beverage cans are ever more popular, but only every third is sorted out. This, and the need for a circular way of handling packaging waste, is the message of the joint effort by Mattoni and Košík. Together, they will be offering a special edition of lemon-flavored Mattoni mineral water in a returnable can. The customers who will buy the can and receive their deposit refund upon returning it will be sure that every returned can will be fully recycled. Ideally into another can.

“For the very first time in the brand’s 150-year history, Mattoni is offered in cans,” says Alessandro Pasquale, the CEO of Mattoni 1873. Beverage cans are becoming ever more popular with consumers. There were over 700 million cans sold last year in the Czech Republic alone. “Unfortunately, only a small portion of the material returns into circulation. That is why we want our can to have a better chance at being reused. Our goal is to have significantly more cans sorted out and subsequently recycled. The ideal of way of achieving that is, in fact, the deposit-refund system,” he adds. The special edition, lemon-flavored Mattoni returnable can will be available at Košík.cz.

The returnable Mattoni can is a follow-up to the pilot project involving returnable PET bottles, which Košík has been selling since January of this year. “Although spring covid-related complications significantly affected the launch, we can already say that the declared consumers’ interest in a greener way of handling PET bottles has been validated. Roughly 70% of Košík shoppers who have purchased Mattoni natural mineral water prefer the returnable PET bottle,” sums up Tomáš Jeřábek, the CEO of Košík.cz. “We’ll have to wait some time for a comprehensive evaluation though,” he adds.

Košík has long been tracking customers’ response to packaging innovations. All previous projects have proven that households are open to change. For instance, they had no problem storing away empty returnable PET bottles during the period when it was impossible to return them due to the covid crisis. Now, the returnable can could reflect this trend even with corporate customers. “We have managed to refute the belief that households and firms are unwilling to make compromises in exchange for products that are more sustainable. From where we stand, it’s become clear that Czechs will handle a considerable expansion of returnable packaging and we expect the new cans to confirm this,” concludes Jeřábek.

Can sales are soaring, sorting unable to keep up

In the Czech Republic, can sales have seen a threefold increase in the last ten years. “In the last year alone, 100 million more cans were sold than the year before,” states Stepan Vashkevich from INCIEN. Unfortunately, sorting and recycling are seriously lagging behind. EKO-KOM estimates that only three cans of out ten are sorted out. What this means is that roughly 7812 tons of aluminum go to waste every year. That would be enough material to make 312 millions of new cans. “Where do those two thirds of cans end up, if not in a recycling facility? From municipal waste bins they are transferred to incineration plants and landfills, or even worse, they might end up in nature,” says Vashkevich.

Moreover, the third that does get recycled is mixed with larger pieces of aluminum, resulting in unnecessary material loss of thin-walled aluminum. In the Czech Republic, there is not a single facility dedicated to can-to-can recycling.

The available data about sorting and recycling of PET bottles and cans suggests that there is still room for improvement in the Czech Republic. “Putting the principles of circularity into practice, i.e. bottle-to-bottle and can-to can recycling, unfortunately seems improbable at the moment. Being able to handle these beverage containers efficiently would require legislative changes, which would allow the introduction of a deposit-refund scheme, mandatory for all manufacturers,” adds Andrea Brožová, the spokeswoman for the Zálohujme.cz initiative.